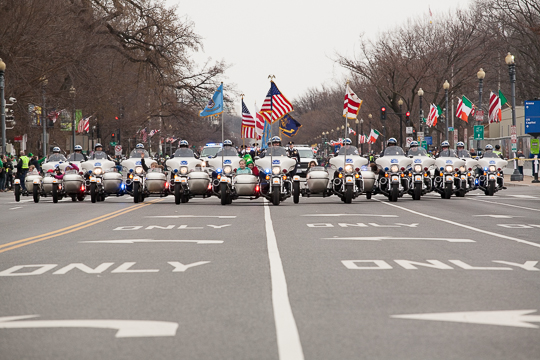 
The first St. Patrick’s Day Parade in Washington, D.C. was held in 1971 and traveled along Massachusetts Avenue from Dupont Circle to the statue of Robert Emmet. Since then, this annual affair has grown from what was little more than a leisurely stroll by a few hundred participants to what is now being called “The Nation’s St. Patrick’s Parade.”

In 1974, the Constitution Avenue route was established and the march became a full-scale Parade with Marching Bands, Pipe Bands, our Nation’s Military, Police, and Fire Departments as well as Floats, Novelty Groups and those marchers wearing green. Trophies are now awarded in a number of categories to participants. Traditionally, the parade is not a forum for political issues. Elected officials march, but those running for office are not allowed to use the Parade as a campaign site.

The Parade is an Irish community endeavor that was started by the Irish American Club and is now held in cooperation with the National Capital Park Service. The President of the Irish American Club maintains a place on the Board of Directors of the Parade Committee. The Parade has grown both in size and prestige. Through the work of the Parade Committee, a group of 40 or more dedicated Washingtonians, the two-and-a-half-hour spectacular event is created. Their work begins in September before the March Parade. In September invitations go out to bands and marching groups and to sponsors and floats and other groups. In January, the Committee’s work begins in earnest. The Parade’s Magazine, considered to be one of the most professional parade magazines in the nation, is formulated and articles are solicited from prominent writers reflecting the chosen theme for that year. The Committee holds six to eight fundraisers before the parade. Every one of the local pubs sponsors a parade party. These events are almost as much fun as the parade itself and are open to the public. Irish musicians, dancers, and singers get everyone in the mood for Parade Day.

Choosing the Grand Marshal is an important part of the advance planning for the Parade. The men and women chosen to lead this event must be considered carefully. In 1986, retiring Speaker of the House Thomas P. “Tip” O’Neill honored Washington by being Grand Marshal in what he called, “the last greatest honor of my Washington career.” Included in our distinguished list of Grand Marshals are Helen Hayes – the First Lady of the American Theater, and John Hume – leader of the Social Democratic and Labor Party. Also, a tradition starting with the very first parades is the Gael of the Year, an honor given to an outstanding person in the Washington DC area who has made a significant contribution to the community. Some of the past Gaels include Paul Berry – TV News co-anchor and Humanitarian, Father Eugene Riordan – Educator and Missionary, and our recently deceased Committee Member, Parade Photographer, and friend of the Irish Community, Pat “Irish Eyes” Cady. Everyone is Irish on St. Patrick’s Day, and truly this Parade is for everyone. It is a family day. A day when people come together to enjoy the sharing of culture, the celebration of being Irish or almost Irish and to enjoy a well-planned, well-run event that is worth the trip to Constitution Avenue to set the tone of spring.