Get Wed in Ireland or the USA! 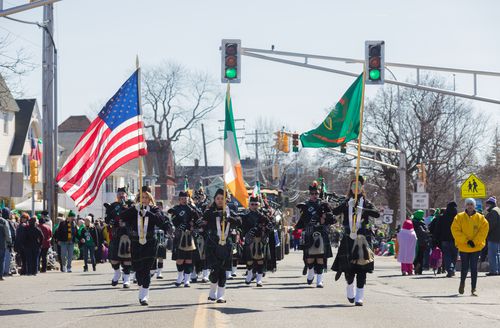 
The first parade to honor our Irish heritage was held in 1952 and was the culmination of over a year of planning by members of the Brian Boru club, the Ancient Order of Hibernians with assistance from the members of the Holyoke Police and Fire Departments. Early support was also received from the Holyoke parishes and Catholic schools in the city.

With a modest $200 donation the annual parade has mushroomed into the premier Saint Patrick’s Parade in the Northeast. Coupled with our Saint Patrick Road Race, held annually the day before the parade, it has been determined our organization has an economic impact that is in excess of $20 million according to the study conducted by the University of Massachusetts Donahue Institute.

The city of 45,000 people has welcomed up to 400,000 people for the spectacular parade that showcases prize winning floats, championship bands from the northeast and notable celebrities each year. Musical units include international bands as well as the famed and elaborately costumed Philadelphia Mummers string bands – an annual favorite since 1967. What began as a humble celebration so many years ago has grown into a major series of events that culminates with New England’s preeminent Saint Patrick’s celebration. Along with the Mardi Gras, Mount Rushmore, Daytona 500,the Rose Parade and other national treasures, the Holyoke Saint Patrick Parade has been Designated a Local Legacy by the Library of Congress.