Get Wed in Melbourne 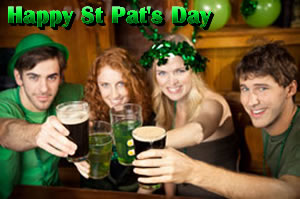 
In Australia, thousands of people of Irish descent or who fancy themselves as Irish at heart, are expected to celebrate Ireland's national day and the traditional feast day of the country's patron saint, St Patrick. St Patrick, who was born in Roman Britain in the 5th century, is widely credited with having introduced Christianity to Ireland and, according to Irish mythology, to have driven all snakes from the country. St Patrick's Day is the anniversary of his death*. A variety of dates are given for his death. In the Book of Armagh "the elder Patrick"is said to have died in 457. In 461/2 the annals record the repose of Patrick, in 492/3 they record the death of Patrick except he would have been 120.