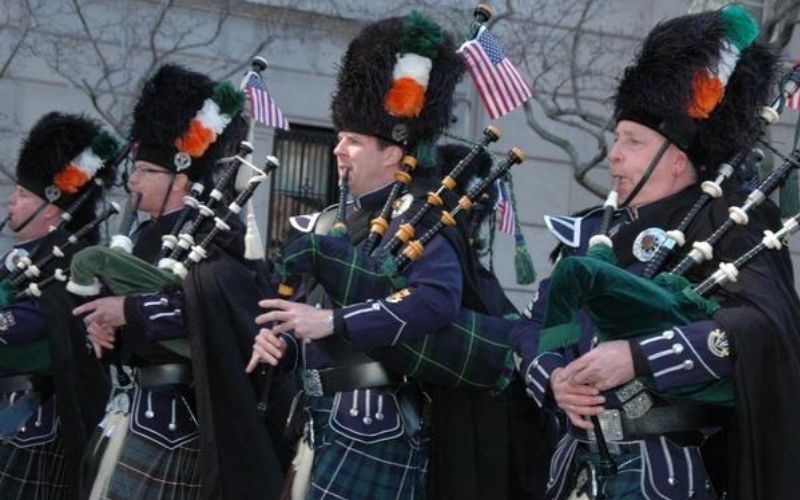 
While the Irish in Newport began parading on St. Patrick’s Day through the streets of that town as early as 1842, it was not until 1852 that the Ancient Order of Hibernians Sick and Burial Society, which had been organized in 1849, held its first public parade in Providence on St. Patrick’s Day. The rise of Know-Nothingism caused a hiatus in public demonstrations until 1858 when the society again marched.

The impact of the 1857 Depression ad then the Civil War caused a second, longer hiatus. In the aftermath of the Civil War, many Irishmen who had served in the war wished to retain the comradeship they had known. Accordingly, Irishmen throughout the state organized militia companies which began parading on St. Patrick’s Day in various places. The entire battalion of Rhode Island Guards, along with the temperance societies at Providence’s St. Patrick’s and St. Joseph’s churches, first paraded in Providence on a snowy (typical) day in 1867. In January 1870, representatives of the Irish Guards met in convention with the various Irish societies in Providence in the Brownson Lyceum Hall to initiate what would prove to be a forty-year tradition of the Irish parading, or at least considering parading, on St. Patrick’s Day. In February 1877, the editor of the Weekly Visitor offered this explanation: “The purpose served by the St. Patrick’s Day parade was to impress upon the children of Irishmen a love for the land of their fathers and a hatred for its opponents .”

After the organization of Rhode Island divisions of the Ancient Order of Hibernians of the United States, a group originally centered in New York, the AOH began playing a dominant role in organizing the Providence parade. In 1877, the impact of the Long Depression that began in 1873 and the wish to aid their homeland, which again experienced a famine in 1877, again caused the parade to be cancelled. Parading resumed in 1883, but enthusiasm among the second and third generation Irish for it faded. In the 1890s and early 20th century, it was the militia units or later the National Guard units joined by military companies formed by the AOH, the Hibernian Rifles, and Young Irelanders, the Irish Volunteers, that kept the tradition alive.

There would be no parade in Providence because of the Great War. In 1919, the last of the first series of St. Patrick’s Day parades in Providence was unlike any other. Over seven thousand Irish men and women marched and that count did not include the band members. Those who turned out did so to support the cause of Irish Self-Determination. Veterans of the war marched together in their military uniforms. The ten divisions that followed the veterans were made up on parish groups and parish organizations and were organized on a regional basis. Financial concerns and the more popular alternative of having a dinner on St. Patrick’s Day caused a long pause in the tradition of parading